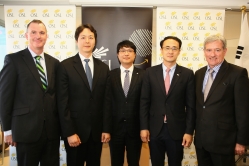 QSL CEO Greg Beashel said an official signing ceremony was held this week which sealed the deal for QSL to supply 1.164 million tonnes of raw sugar to Korea’s three refineries over the 2015 and 2016 seasons.
“We were pleased to welcome representatives from these world-class businesses who are important customers of Australia,” Mr Beashel said.

“Our 40 year partnership is built on the principles of trust, respect and a two-way creation of value. This is at the core of QSL’s producer-seller approach which is about building sustainable relationships with customers.

“We pride ourselves on providing quality sugar that is best suited to each customer’s operations and delivering the sugar when the customer wants it, on-time and in-full.”

Mr Beashel said QSL and Korea’s history dates back to 1974 when Australia replaced Taiwan as the major supplier of raw sugar into Korea and QSL signed its first long-term contract.

“Long-term contracts are a key feature of our ongoing partnership which has seen more than 22 million tonnes of sugar exchanged between Australia and Korea,” Mr Beashel said.

Mr Danny Yoon, General Manager from CJ Cheiljedang Corporation said during his recent visit to Queensland that the company had a long history of working with QSL.

“We have enjoyed visiting Australia and meeting the people behind the product including the farmers who grow the cane, millers who process it into sugar and the QSL team that markets the sugar,” Mr Yoon said.

“We appreciate the support from the Australian sugar industry and value the producer-end-user model partnership that we have with QSL.”

An official signing ceremony was held at the QSL Brisbane office this week followed by a dinner with representatives from the Queensland sugar industry.