QSL past and present employees join together to celebrate 50 years

The terminal was officially opened by the Queensland Premier Sir Francis Nicklin on Saturday 3 October, 1964, with its first bulk sugar cargo despatched to Japan aboard the Sally Stove.

It replaced White’s Shed, which handled bagged sugar and had a storage capacity of about 7500 tonnes. 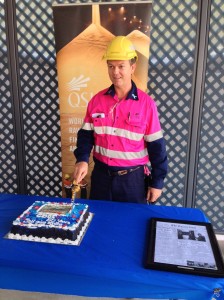 Speaking at the event, QSL Operations Manager Damian Ziebarth said the opening of the Cairns BST back in 1964 was an important achievement for the Queensland sugar industry.

“Cairns was the last of Queensland’s current Bulk Sugar Terminals to be constructed, starting with Mackay in 1957 and followed by facilities at Bundaberg, Lucinda, Townsville and Mourilyan,” Mr Ziebarth said.

“It came about only after significant negotiations with the Queensland Sugar Board’s Japanese customers to encourage their move from bagged to bulk sugar deliveries in order to gain the reduced freight rates and handling costs that came with that.”

Today the Cairns BST features two storage sheds with a combined capacity of 252,000 tonnes of raw sugar which is delivered to site by road from the Mossman and Mulgrave sugar mills.

It is operated by QSL as part of a state-wide raw sugar logistical network with a combined storage capacity of 2.5 million tonnes.

“This storage capability is one of the Queensland sugar industry’s greatest strengths when competing in the global sugar market and enables QSL to maximise sales after our cane harvesting season, when prices are traditionally higher,” Mr Ziebarth said.

“As a result of this, the Cairns BST has helped put millions of extra dollars into the pockets of Queensland cane growers and millers during its 50-year life and will continue to play an integral part in Queensland sugar industry for many years to come.”